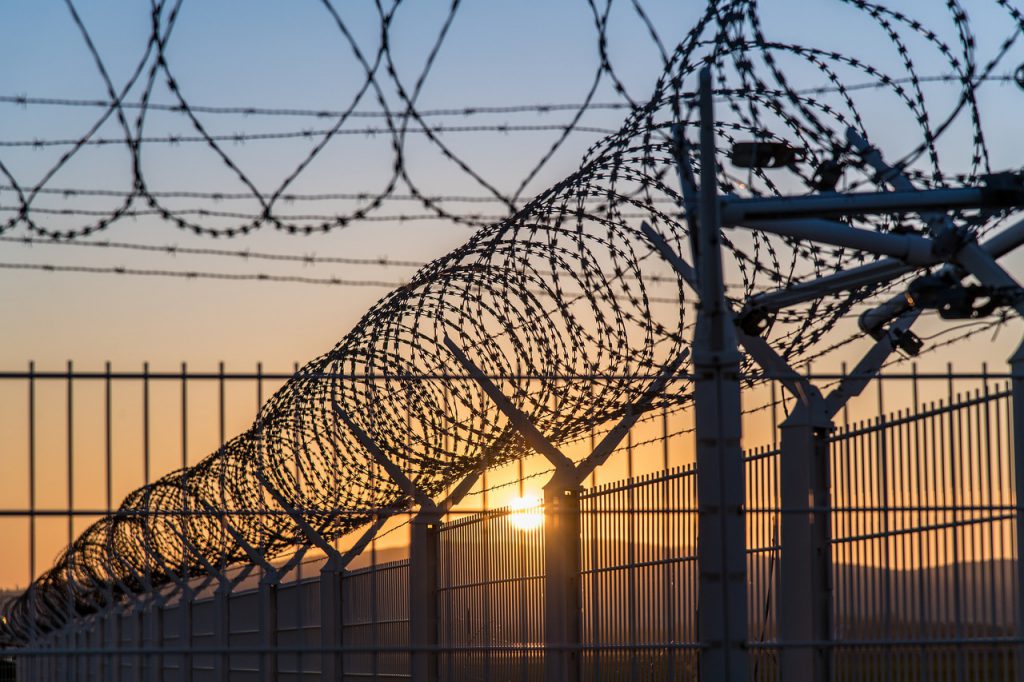 Welcome to My Hell

I wrote this letter Friday, May 23 2006 while serving out my sentence in Corcoran State Prison in California. In the time since I wrote it, I have been transferred to San Quentin State Prison. I’m in a better place now, but my pain and thoughts remain unchanged. On January 8, 2008, I typed my old letter for others to read.

The people who know me ask, “How are you doing?” There are those who don’t know me and they ask” Who is Aly.” I can tell you: who I was, where I am at, how I am doing, and what’s going to happen to me.

My name is Aly Tamboura and I was once a great man. I have never written new legislation; I have never composed music, and I have never written a prize-winning novel. I was a great man because I was a kind, humble, and gentle father to my three children. I was a hero to my children and filled their lives with love and laughter. As a young family, we celebrated seventeen years of life together with bountiful happiness. I nurtured my children from sprouting infancy to their adolescence. Our lives were beautiful and we embraced all the world had to give. Our happiness ended when I was ripped out of their lives by a senseless act, denying them the future a father is supposed to guarantee: fatherly love, guidance, and a chance to grow up with both parents. My children will not enjoy any of these rights.

The determination of an unscrupulous judge took away our lives. To this biased man, my children and our happiness together was only abstract, instead of the reality of a family of human beings with hopes and dreams. This judge, who has sworn an oath to defend the constitution of the United States, has failed me, his office, and the community he serves. The U.S. Constitution put simply, secures the blessing of life, liberty, and the pursuit of happiness to all of the people no matter what their color or ethnic orientation. This Monterey County Judge, Russell Scott, uses his biased and warped personal beliefs to destroy lives. I, like many before me, as well as after me, was given a sentence that does not fit my crime. If you are a black man, a Mexican man or anything but white, Judge Russell Scott will punish you beyond the fullest extent of the law. This former prosecutor turned judge has never left his old prosecutorial days or ways behind. He now works as a prosecuting judge, jury, and executioner. He has refined his methods almost to perfection, sentencing men (mostly black) to exorbitant amounts of prison time for mediocre crimes. Despite many complaints and even a confession by his clerk of ten years that he continually has prejudged defendants, Judge Scott goes on nearly uncheck on his prejudicial reign of terror. The “Jim Crow” style of justice has been revived and thrives in Monterey County California.

My alleged crime was violating a court order to stay one hundred yards away from my ex-wife and her place of residence. The order was put in place by the same judge in what I can tell you is the worst divorce case ever. A divorce filled with lies, vengeance, and Evil.

On September 14, 2005, my girlfriend, my two oldest children and I went out to dinner on a family outing. When we finished our night out, I drove the three of us towards home. On the way home we stopped and dropped my son off a few blocks away from his mother’s house; a house that my ex-wife had recently move to, about eight blocks away from the house I shared with my oldest daughter and my girlfriend. I did not know the location of her new home, so my children guided me to within walking distance. I pulled my vehicle over to the side of the roadway, said “goodbye” to my son, and drove home.

Three weeks later I was arrested and wrongfully convicted of violating a restraining order by allegedly coming too close to my ex-wife’s house. There was no physical contact, no verbal contact. My ex-wife did not and could not see where I dropped my son off. Judge Russell Scott decided that this act of a father dropping off his son a few blocks away from his ex-wife’s home was harassment on my part and sentenced me to fourteen years, eight months in prison.

As my time passes serving this prison sentence, all that I have loved, all that I have worked so hard for, will be gone forever. Let me explain what will, and is happening to my past life. First, my mother is ill and more than likely will never see me as a free man again. My father lives in Africa and cannot afford the expense to fly to America to visit me in prison. By the time I am releas·ed, my mother and father will no longer walk this earth. They will have joined our ancestors before them in the grave. My children are not permitted to come to see me, and in fifteen years they will be grown with their own families. I fear that by this time they will have no need for me and little remembrance.

My son blames himself for asking me to drop him off, his life will be one of unwarranted guilt. My girlfriend, who I love deeply will become another man’s wife. The corporation I founded fourteen years ago is being pillaged by my business partner and ex-wife and will be long gone. Friends who co-signed in financial matters will have to pay my debts. These same friends are angry at the situation and do not correspond with me. I don’t blame them. I will leave prison with no home, no family, no possessions, and no money to claim. The life I knew will be completely erased from the world.

My life in prison is not easy to explain to a person who has never been to a level four maximum-security prison. There is no comparison to the county jail or any drunk tank. This place I call home can only be described as “hell-on-earth. ” My first one hundred forty-six days in prison, I was in what is known as reception. I was confined to my cell twenty-four hours a day. I managed in a day without sunshine, without a child’s laughter, and without human touch. I struggle in a place with no seasons, no fresh air, no trees, no mountains, and no ocean. This is an existence devoid of smiles, happiness, or hope. Now, multiply this by 5,330 day’s and you with begin to comprehend my world and its horrors.

Now, out of reception, I am locked away in a cell twenty-three hours a day and on most weekends it’s twenty-four. I am allowed one hour a day on the exercise yard if I’m lucky and the prison is not locked down because of violence. Today on the yard, two men attacked a third with a homemade shank (knife) and the guards shot and killed one of the attackers. Serial killers, mass murderers, child molesters, gang members, thugs, and every other variant of violent men sentenced to countless years, and sometimes lifetimes, share the prison yard with me. Most of these monsters have nothing left to lose in life, making the level four pison yard at Corcoran State Prison one of the most dangerous places on earth. Beatings, stabbings, fights, rape, and being shot by correctional officers is the routine. The violence here is so terrible, the brutality so rampant, it has caused an FBI investigation and legislative hearings.

I live alone in a concrete cage no bigger than the average bathroom. There are no bars or traditional stone walls, only unpainted drab gray cold concrete walls, a chilly steel bunk, a filthy toilet, and a solid steel door. When the one-ton steel door slides shut there is a boom that sends a shudder through my bones and an echo into emptiness. My time is spent in a haunting serial silence only broken by the screams of the insane locked away with me in their own personal dungeon. Even the officers who guard me are faceless dark shadows that pass by the thick glass of the sally port door of my cell door. The lights never go out, instead, they bum with the infinite yellow/orange colors like the flames of hell. The cruelty of this isolation is inhumane and barbaric It is mental terrorism. The loneliness I feel is overwhelming. I have no television, no newspaper, not even a stamp or envelope to send a letter home. All I have is a pencil and a couple of sheets of paper that I am writing my feelings on. I am slowly wasting away, rotting, deteriorating both mentally and physically. I hang on to the threads of my sanity, my spirits broken, dreams shattered, the “man I was” fleeting.

Is this justifiable punishment and is this rehabilitation? Is this life in the depths of hell the cure for a naive father who may have dropped his son off too close to his ex-wife’s house? No, it is not, and I will never agree with this! The injustice done to me, my children and those who love me have sparked an anger in me. This bitter anger gives me the strength to survive this hell hole. For fourteen years, eight months I will endure this torture, while anger and thoughts of injustice continue to bum in me. All of my possessions, pride, love, and hope have been stripped away from me. All of my humanity drains slowly away as the days pass. When isolation, brutality, and violence are my daily existence, what is the by-product?

I’ll explain what the prison system will do to me. The Aly Tamboura, loving father, businessman, lover of life will be no more; he will die along with his spirit, what lives on will never forget this injustice. Even in my faith in God, I will not offer any forgiveness. This “new me” brews in the evil, brutality, and violence of the penitentiary. The injustice served to me has already sparked a hatred of the American justice system. My hatred and anger will fester, turning to a burning rage. My heart will harden to the world. My core, my very soul will become cold, empty, and black. I will become a creature of my environment; a tortured loveless man. This tortured man will endure through this fate which is harder than death. On October 20, 2016, what is left of me will be released into the world.

The recidivism in California is over seventy-one percent. I cannot at this time say that I will fall into this percentile, but if I do don’t blame me. Blame what the pundits call justice and rehabilitation. Blame the not so honorable Judge Russell and his prejudicial beliefs and actions. What I can say is the very system that creates men like me will continue to wonder how a human being can be so destroyed and what can be done to come up with a fix. Exorbitant amounts of prison time is not a fix, only a tool to destroy minorities and men of color in an already fragile society.

God will have no mercy on those who bore false witness against me, unfairly judged me and murdered my soul. Why should I